First off, an apology:
I'd like to say I have never failed to update a blog for two months, but sadly it would be a massive lie. In my defence I spent the run up to Christmas working on what will hopefully become my second novel, but I've now made a resolution to keep updating this every Monday - bank holidays excepted :) 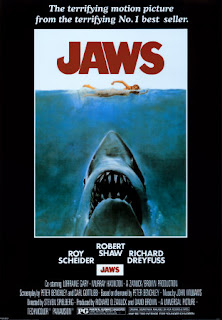 WARNING: the following blog post contains spoilers. However, as until a few days ago I seem to have been the only person in the Western world who hadn't seen Jaws, that probably won't matter.
So, Jaws. How have I avoided it all these years? Not deliberately, that's for sure. I like horror films, admire Spielberg and find sharks fascinating. But somehow, I never got around to seeing the ultimate shark film, even by accident, until the other night.
The first surprise of the film, for me, was that it starts off in a mildly racy, even soft-porny fashion, with a teenage party amid the dunes of an idyllic beach. A pretty blonde girl is making eyes at a pretty blond boy as the others drink and chat; soon enough, naturally, she's running towards the ocean pulling her clothes off, in order to entice him into a midnight swim. This scene is an interesting combination of twilit side-boob and a rising sense of dread. Will the adorable pair live happily ever after, frolicking naked in the waves, or will this scrummy morsel of Seventies totty get EATEN BY A SHARK?

Tough call, I know. The next day, she – or half of her, anyway – is washed up on the beach, badly mauled by what the Mayor of Amity (in many ways the villain of the piece, and the implacable opponent of Roy Schieder's newbie police chief) insists is a boating accident. Chief Brodie (Scheider) wants to close the beach, but the little town, and indeed the whole island, relies on the tourist trade, and the big Fourth of July celebrations are coming up. The businessfolk of Amity are against him at a town meeting, and despite mad old sea-dog Quint's offer to kill the beastie for ten grand, the Mayor's wallet remains resolutely closed.
Cue a clash of wills, only won by Scheider after a little boy is nommed right up by the shark during said Independence Day beach bonanza. Oops. Scheider gets bitchslapped by the mite's grieving mother, marine biologist boffin Matt Hooper (Richard Dreyfus) shows up, all giant specs and boyish enthusiasm, Quint is recruited, and battle is joined with the great white as our three heroes set out on Quint's rustbucket shark-boat, the Orca (named after a type of killer whale).
After that it's mostly fishing, fighting, drinking and dying – along with a brilliant drunken scar-showing scene which I now realise is the original of Mel Gibson and Rene Russo's wound-off in Lethal Weapon 3 (and a similar one in Chasing Amy). Late to the party as ever, that's me …
I'm guessing everyone knows who wins (even I knew that) – but one of the most unexpected things about this film is how few victims the shark actually claims before it's killed: only four – including the girl and boy whose deaths inspire the final hunt. I'd always had a vague idea that Jaws went on the rampage up and down the Eastern seaboard in the style of an ocean-dwelling Pac Man, getting through unwary swimmers like a party-size bag of Maltesers – but it seems I was wrong. (I bet the sequels are much more bloody; although the law of diminishing returns means they're also probably much less tense. Only one way to find out ….)
The other surprise is how little of the actual shark (yes it's floppy, yes it's rubbery, no it's not all that scary) we see. The scenes where the Orca pursues the shark (and vice-versa) are notable for the fact that nearly all the time, the hunters and the viewer aren't watching for the famous dorsal fin, but for a couple of cheery yellow plastic barrels – attached to the shark via harpoon, in order to make it harder for the beast to dive. I can honestly say I've never been so frightened by a yellow barrel in my life, and filmically speaking, it's a brilliant synecdochal device: the barrels standing in for the shark until they actually become more terrifying than it (not too hard, you may argue).
As ever, the secret of horror – mostly adhered to in Jaws – is to keep the monster hidden. You can show a blurred snatch of its shadow, or better, its gruesome work (the mutilated body of the unwise fisherman whose looming corpse provided the only real EEK! moment for me) – but keep the Big Bad well out of sight – at least until the end.
And it's at the end where Jaws really comes into its own. Without wishing to spoil it for the bushmen of the Kalahari, the monks of Tibet or any Amazonian tribes yet to be encountered by friendly logging companies, a major character dies – is almost thrown away, in fact – in a properly shocking moment. Despite my instinctive awareness that in a horror film, almost any character is dispensable, I've got to say I didn't expect “Mr. X” (see what I did there?) to provide the shark's final meal, shortly before it's rendered into catfood by an exploding oxygen tank stuck in its teeth.
All in all, a great film – just the right combination of well-paced character development, seafaring adventure and rising tension: 8 out of 10. (It would have been a 9, but watching it from a modern perspective, I'm afraid I did have to knock one point off for the underwhelming bath-toy quality of the shark.)
Coming soon: I have never … read Harry Potter (I KNOW – but it's true!) wherein I'll be reading and commenting on the first book in the series, unencumbered by any foreknowledge of the world or characters whatsoever. Not.
Posted by Katy Darby at 13:35